Create Excel names that refer to cells, a constant value, or a formula. Use names in formulas, or quickly select a named range. Have fun with names too, and add strange characters, like a happy face!

How to Name Cells

Create Name for a Value

How to Use Excel Names

In Microsoft Excel, you can create names that refer to:

After you define Excel names, you can:

The instructions below show how to create names and use names in your Excel files. Get the sample Excel workbook, to follow along with the instructions.

NOTE: To create a quick list of all the names in a workbook, see the Quick List of Names - No Macro instructions.

How to Name Cells

Watch this short video to see how to name a group of cells. Then, go to that named group of cells, or use the name in a formula. The written instructions are below the video. TOP

You quickly name the selected cells by typing in the Name Box. NOTE: There are a few rules for Excel names, shown in the section below. 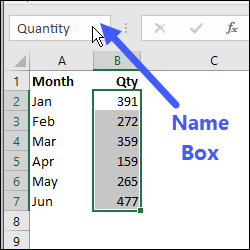 There are rules for Excel names on the Microsoft site, and I have briefly summarized those rules below.

However, despite these strict rules, some unusual characters are allowed in Excel names. There ahe examples of what is allowed, in the Strange Characters in Excel Names section, further donw on this page..

The best way to see all the names that you've created is by using the Name Manager. The steps for that are in the next section, below.

However, there are 2 ways that you can also see the names on the worksheet:

You can create a list of names on a worksheet, with a few easy steps. This is a quick way to double-check the names in the Excel file, and to see their Refers To formulas 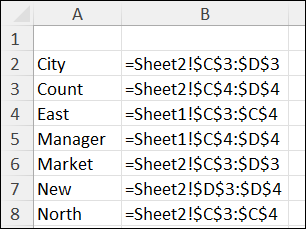 A 2-column list of names will be inserted, starting in the selected cell, so make sure you have room for your list

The list of names will contain all the workbook level names, unless there’s a duplicate sheet level name on the sheet where the name list is pasted.

In that case, the sheet level name appears in the list, instead of the workbook level name.

To see some of the named ranges on a worksheet, use this quick trick:

The names of some ranges will appear on the worksheet, in blue text, like the MonthList in this screen shot. 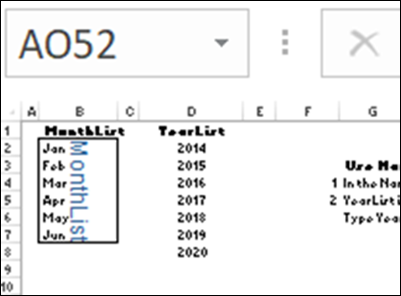 To see details on all the names in the entire workbook, use the built-in Excel Name Manager tool.

OR, open the Name Manager with the keyboard shortcut Ctrl + F3

After you create a named range, you might need to delete that Excel name later. Sometimes, a name is no longer needed in a workbook.

Follow these steps to delete a name in Excel:

After you create a named range, you might need to change the cells that it refers to. This short video shows the steps, and there are written steps below the video. 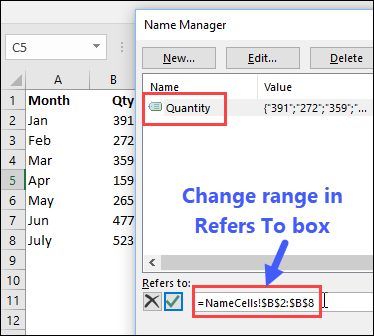 To quickly name individual cells, or individual ranges, you can use heading cell text as the names. Watch this video to see the steps. Written instructions are below the video.

A quick way to create names is to base them on heading cell text (worksheet labels). In the example shown below, the cells in column E will be named, based on the labels in column D. 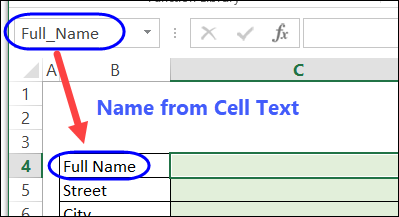 The cell text might be altered slightly, when the name is created. For example:

For more information on invalid characters, see the section above - Rules for Excel Names

To name cells, or ranges, based on worksheet labels, follow these steps: 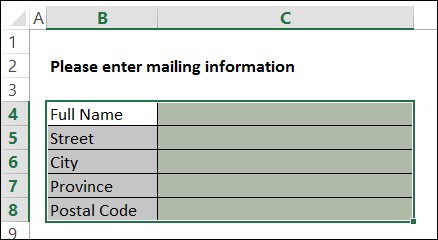 Below that heading, there 4 check boxes:

To create the names:

For example, in the screen shot below: 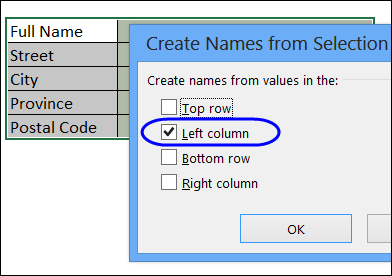 For the next example, in the screen shot below, two locations are selected:

When multiple locations are selected for the cell text, names are created for each selected location.

In the example shown below, 4 names will be created: 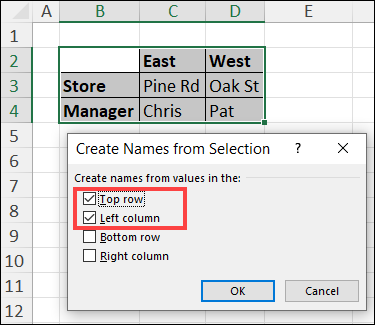 For the next example, in the screen shot below, all four of the locations are selected:

A name is created for all 8 of the label text cells: 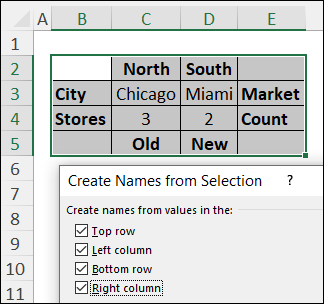 Each named range includes the non-label cells adjacent to it. For example, both the City name and the Market name refer to the same two cells 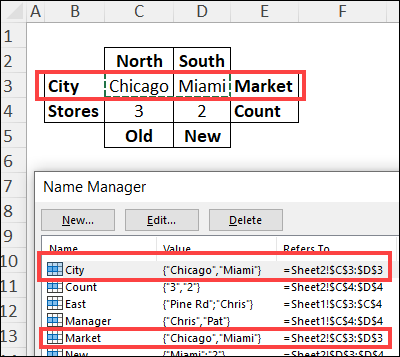 Create Name for a Value

Most Excel names refer to ranges on the worksheet, but names can also be used to store a value.

For example, create a name to store a percentage amount that you use frequently, such as a retail tax rate:

Then, use that name in formulas, instead of typing in the value 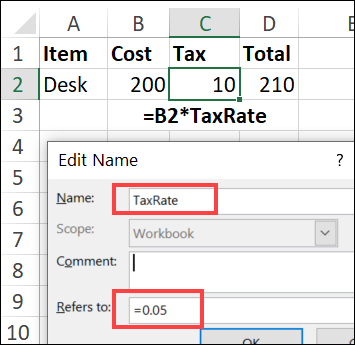 You can also create names to store values that are difficult to enter. For example, some formulas use this strange-looking number. According to Excel specifications on the Microsoft site, that is the largest positive number that you can type into an Excel cell.

Instead of typing that number into your formulas, you could define a name, using that value (copy the number from this page before you create the name): 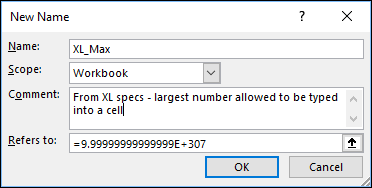 Then, use the XL_Max name in formulas, like this LOOKUP formula that finds the last number in a column. 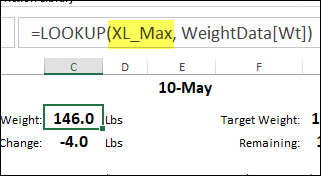 How to Use Excel Names

After creating names, you can use them:

Use Names for Quick Navigation

If a name refers to a range, you can select that name in the Name Box dropdown list, to select the named range on the worksheet.

NOTE: If a name does not appear in the drop down list, you can type the name instead 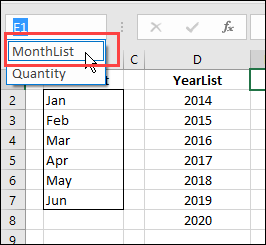 Use Names in Formulas

You can also use names in formulas. For example, you could have a group of cells with quantities sold. Name those cells Quantity, then use this formula to calculate the total amount: 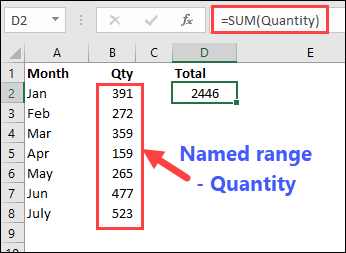 In old versions of Excel, the Name Box was a set width, and you couldn't change that. Here's how you can adjust the Name Box width in newer versions: 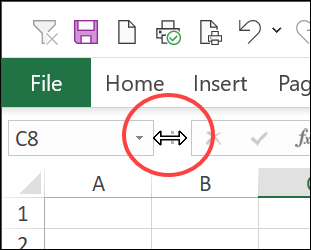 Another handy trick is that you can use the Name Box to select unnamed cells too. Here are a couple of ways that trick can be useful -- unhide columns, or fill a long range of cells.

Here's a quick way to unhide specific columns, and leave others hidden.

With Excel's AutoFill feature, you can create a list of dates, or numbers, or other sequences, very quickly. Just type one or two values as the starting sequence, select those cells, and double-click the Fill Handle to fill down to the last row of data.

Sometimes though, there's no data in the adjacent column, so AutoFill won't work with a double-click. You could drag the Fill Handle down, but that's not very efficient if you need to create a long series.

Use a Named Excel Table

Use a Named Excel Table

The easiest way to create a dynamic named range is to start by creating a named Excel table. Then, define a range based on one or more columns in that table.

In this example there is a list of parts on the worksheet, and a named table, and dynamic named ranges will be created. Later, if you add new items to the table, the named range will automatically expand. 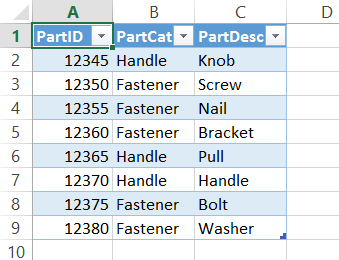 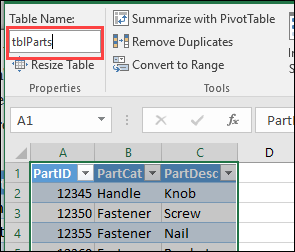 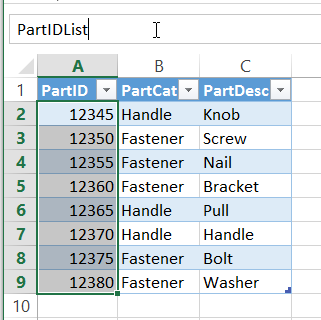 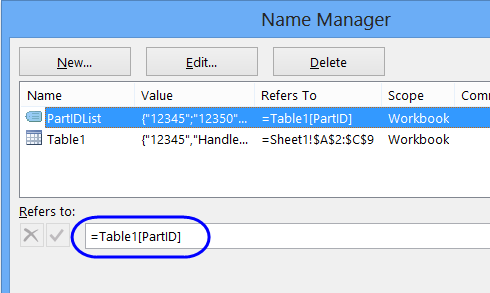 Because the PartIDList named range is based on a named table, the list will automatically adjust in size if you add or remove part IDs in the list. 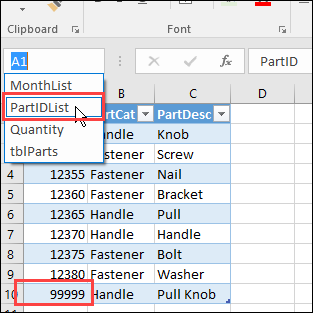 The written instructions are below the video.

Dynamic Named Range Based on Formula

If you don't want to use a named table, you can use a dynamic formula to define a named range. As new items are added, the range will automatically expand.

Note: Dynamic named ranges will not appear in the Name Box dropdown list. However, you can type the names in the Name Box, to select that range on the worksheet. 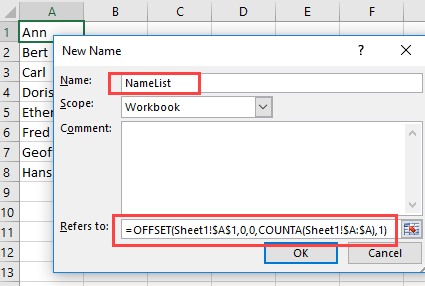 Even though Microsoft’s rules for Excel names say that you must use only letters, numbers, periods, underscores and backslashes, other characters are allowed.

Based on testing, "letters" has a broad interpretation, and goes well beyond the basic letters of the alphabet. You can use a wide variety of Unicode characters too!

For example, the screen shot below shows Excel names created by Peter B. He used Unicode text in his Excel names (shown below), to create arrows and subscript in Excel names, for a statistics workbook. 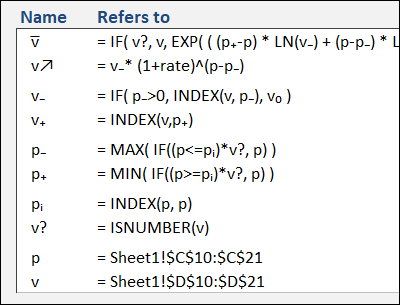 Inspired by Peter’s examples, I did a few simple name tests, using characters created with the Alt key and Number keypad. For example:

In the screen shot below, you can see the list of unconventional names that I created. 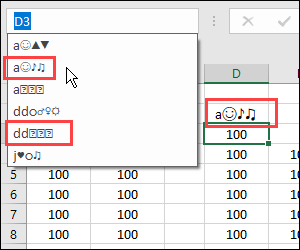 For an in-depth look at what characters are allowed in Excel names, see Martin Trummer's GitHub project excel-names.

Martin has done an in-depth study of what’s allowed, beyond the basic letters and numbers. When you visit Martin's GitHub page, you'll find written examples, and an Excel file to download.

Here is a screen shot from Martin's Excel file, with his test results. 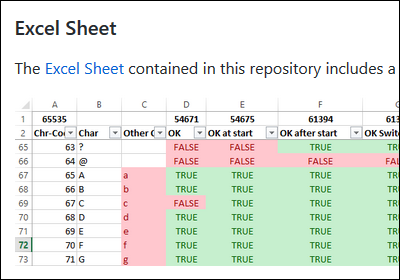 To follow along with the instructions on this page, download the Excel Names Sample File. The zipped file is in xlsx format, and does not contain any macros. TOP

Create Dynamic Ranges With a Macro